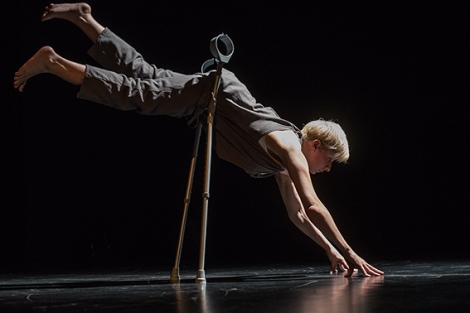 Cunningham will perform two works, Guide Dogs and Give Me A Reason To Live and spend a week working with a group of 16 Australian artists with and without disability in an intensive exploration of her creative process.

Unique and completely beautiful. The Scotsman

Residency participants will explore the methods and concepts that underpin Cunningham’s performative and choreographic practices, focusing on aspects of awareness/presence, perception and individuality. Through movement, language, writing, watching, listening and feeling, they will investigate how difference – of physicality or lived experience – and diversity can both inform and shape our perceptions of self, others and our environment, and how this, in turn, can shape performance.

For more information about Cunningham’s work and to book tickets, visit Guide Dogs and Give Me A Reason To Live.

Claire Cunningham is a multi-disciplinary performer and choreographer based in Glasgow. Originally a classically-trained singer, she began to work in dance in 2005, after working with US choreographer Jess Curtis, who kindled her interest in movement. This led to her pursuing her own training with various practitioners, including a mentorship with Bill Shannon (aka The Crutchmaster) and training in elements of his own Shannon technique. Over the following years she has developed her own movement vocabulary based on the use of crutches, with a resulting interest in realising her own choreographic ideas – often rooted in the use/misuse, study and distortion of crutches. Her work includes the critically acclaimed solo show ME (Mobile/Evolution) – combining dance, text, aerial and visual art, which continues to tour internationally following a successful run at the 2009 Edinburgh Festival Fringe which earned Cunningham a Herald Angel Award. In 2011 Cunningham was awarded an Arts Admin Bursary, and through the Unlimited Commissions for the Cultural Olympiad recently created ’12’, a large-scale group work for Candoco Dance Company under the mentorship of Gail Sneddon. Cunningham is also part of the National Theatre of Scotland’s Auteur Development Programme.