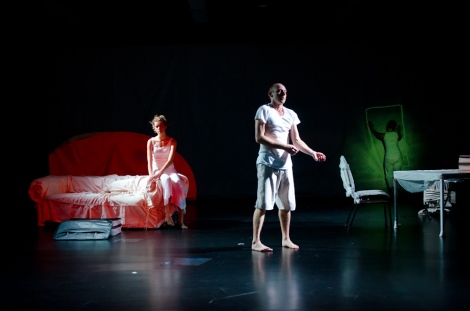 For the second year running, Phil Blackman will contribute to the creative investigations at The Corner Dance Lab in Federal.

He will lead his Pushing out / Folding in workshops across the week.

My classes will focus on the body as a meeting point between the outer world of form, structure and space and the inner world of perception, receptivity and projection. Viewing the body as an intermediary or conduit, dancers will explore the difference between “pushing themselves out” into the space and “folding back in” or withdrawing from the space. This will be a playful exploration of form and self.

Philip Blackman lives and works in Lismore, which is situated in the NSW Northern Rivers region. He has a BA Dance Major from Western Australia Academy of Performing Arts (WAAPA), Perth (2003).

Solos include: In Search of Fluidity, Lismore Show (2009); Landscape of a Memory, Experiments in the dark, NORPA.

Philip is the dance facilitator for local disability service provider R.E.D. Inc. He choreographed under the Artistic Direction of Philip Channells the Sprung! Integrated Dance Theatre project, Dwell – A Triple Bill, Byron Bay (2013). This project was supported by Dance Integrated Australia and the NSW Government through NSW Aging, Disability and Homecare.

He has facilitated workshops for Tralalablip and choreographed their film clip ‘Soccer in Space’ (2012); Philip was employed by NORPA to co-facilitate at Wilson Park Primary School with Rosie Dennis as part of NORPA’s commissioned co-production with Urban Theatre Projects, My Radio Heart (2012/13).

In 2014 Philip was invited to teach dancers from the local area, across Australia and New Zealand at the inaugural The Corner Dance Lab in Federal NSW, which was led by Philip Channells (Dance Integrated Australia) and Gavin Webber (Animal Farm Collective). He continues to teach drama and movement at the Northern Rivers Conservatorium.