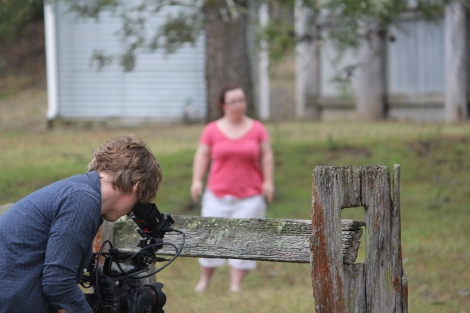 Sydney-based artist Sam James is an award-winning filmmaker who brings his creative expertise in digital media to the Bundanon Local Project : No Time Like Now. He joins fellow collaborator, Philip Channells who is one of the Ambassadors to the Bundanon Trust Artist in Residence Program who with community members of the Shoalhaven district are developing a series of short experimental dance films which will premier in a gallery space in Nowra in 2015.

‘No Time Like Now’ brings together participants with diverse abilities, local community and health services and artists in an integrated dance/video/site project.  Channells and James are working closely with Regina Heilmann (Bundanon Trust) to involve local participants in developing new skills and confidence in contributing to and engaging in the creative process.

The clip below of Falling is an example of Sam’s work filmed at Bundanon. It features performers Alice Osborne and Regina Heilmann and is produced by My Darling Patricia.

Sam James has been a filmmaker and projection designer for performance since 1995. His focus has been to collaborate with new media, dance and theatre projects to develop integrated, paradoxical languages in live performance. He has been a regular contributor to Performance Space for ten years also filling a role as video documentor for many independent dancers there and across Australia.

His approach to the moving image is to be equivalent to the live body, encompassing space, rhythm and time with the use of video. His work involves animation of motion jpeg images to expose the subconscious of natural and urban environments and objects. He trained in architecture and film and has made successful super 8 films and projections such as Nun’s Night Out (winner best dance film, Australian Dance Awards 2006).